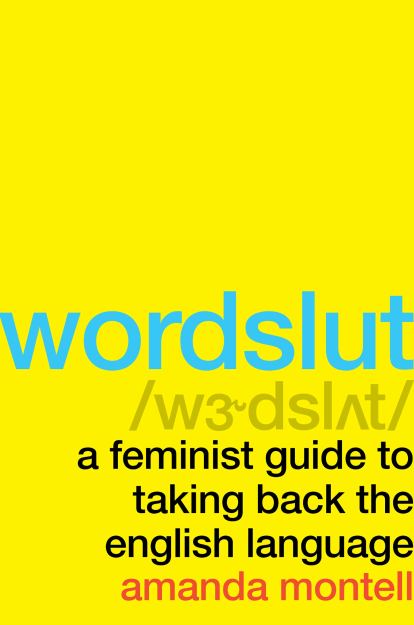 So I recently read Wordslut (2019) by Amanda Montell. I have mixed feelings about the book. On the one hand, the writing is very good. Montell has a great sense of humor and keeps my attention throughout the entire book. This is an impressive feat–my attention span is pretty short and my next blog post would have been 6 months from now if it had not been interesting. But after reading through the whole thing, I think it also has some glaring shortcomings.

I do appreciate that Montell is a Millenial who really has her generation’s back. It’s refreshing to find a non-fiction, academic book that is written by someone who was born after 1985. It is rare for someone that young to write non-fiction that is significant enough that it’s on the New Non-Fiction shelf in the library. Montell’s tone is prosaic, which I think is a strength; she really isn’t trying to impress academia by showing how much linguistics jargon she knows. Her writing is accessible, and that’s really fucking important. It can reach a wider audience because it is not trying to be a textbook. In addition, she is very affirming of young women (111), queers (229) and Black folks (95) and how they all use language. Indeed, the claim could be made that these are the people who invent new language all the time. This is a notable quality–all of these populations have a significant impact on our country. Just look at how much Democrats start crying when they don’t show up to vote.

One of the more important points made is that men and women fundamentally use language differently. Men mostly seem to use it to put forth ideas, or request or exchange information. Women seem to use it for SO much more. Women use language to create trust, to enforce relationships, to reach consensus, and to navigate a myriad of fluctuating social dynamics (125). On a sarcastic note, this makes me wonder why we allow men to speak at all. Their use of language is so limited. Though I also realize, this is probably what we condition both genders to do. Women have access to the fullness and richness of language, while men are encouraged to eschew it. This would account for why women, and not men, are adept at communicating feelings. To me, this is sad. We systematically set men up to fail at the things that bring people closer together. Their violence betrays the isolation society conditions them into.

One of the shortcomings of Wordslut is that it is so English-centric. Montell does use examples from other languages to explain certain things about English, like how people who speak Yoruba explain siblings (143) or how in the Native language Kwak’wala, you can’t pronounce certain words without vocal fry (117). But much of the book focuses on English-speaking media and how non-mobile, older, rural men (NORMs) (127) treat young (white?) women. I feel like the feminism of the book could have really been strengthened if there was any information in it about folks who are bilingual, multilingual or people for whom English is a second language. How do those populations conceptualize gender and sex using the English language? In what ways are their accents and butcherings of English actually radical? I realize that since linguistics is still so young a field, this information might not exist yet. But diluting the whiteness of any non-fiction work is definitely something I encourage by any means possible, and it feels like it could have been possible in this case.

I also feel like a weakness of the book is that it does not talk about how English has been a colonizing force in the world. What does colonization have to do with feminism, you say? Well, it played a huge role in subjugating women, frequently forcing them to become even more objectified since they were able to give birth and thereby produce a labor force. Colonizers like their labor forces because their lazy asses don’t like doing work themselves. What contributions have those years of colonization (and it’s like, a good 500 years) had on the language? We know language changes in as short a time as 50 years. Surely this process has affected the English language, the language spoken by what was once one of the largest colonizing nations on the planet? Yet nothing is said on this subject.

All in all, Wordslut is a fun book that scratches the surface of what feminism in the English language could look like. However, I find the premise on which it is written to be a little naive. The truth of becoming a gender-equal society requires looking at the ugly history of what English has been used for. Should the dominant language of the world be one that came to dominate through unparalleled violence? Should we expect we will gain gender equality by continuing to speak this language? Sure, these were not the questions Montell set out to answer. But in the world right now, where the governments of large and powerful populations are leaning far enough to the right to be called fascist, can we afford to ignore these truths? Can we afford to think that we should focus only on our own (very wealthy and very powerful) country? I think the spirit of optimism is important to carry out our hopes for a better world, but not without looking critically at the English language.