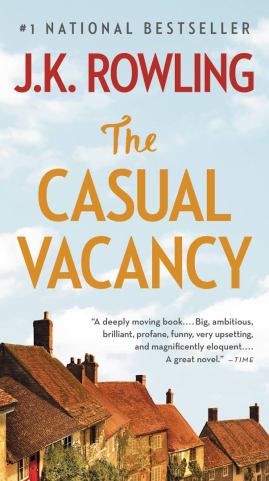 Last week, I finally finished The Casual Vacancy, a recommendation that my mother made. For all the critique I’m about to throw at it, it was not bad overall. As always, Rowling’s strengths as a writer are most clearly illustrated in the characterization and dialogue throughout the novel. Some of the exchanges are quite entertaining, and admittedly, she kept my attention until the very end.

The damn thing started quite slowly, though. I’m beginning to realize that Rowling tends to follow a formula, granted it is a formula that I can forgive. (At least it is not the White Women’s Dystopic Future Novel formula. I’ve had my fill of Hunger Games, Divergent, nuclear bombs, zombies, and apocalypto-love stories. If I had my way, I would ban that particular formula for at least the next ten years). Rowling seems to be a Dickens acolyte; like him, she gives you minimal action until the last 5 pages, where she proceeds to stun the reader stupid with all the action she withheld for the last 495 pages. I may exaggerate slightly.

Another point that makes the book drag at first, at least to me, is that there is a grand total of one (out of some 12 main characters) who is a person of color. Okay, perhaps there are two, and a third plays a minor role, but we definitely see the nine or so white women feature much more prominently. It got somewhat tiring for me after a while to keep track of which Becky was mad at who, especially when all white girl names sound the same. After the introduction of the fifth one, I wondered how many Beckys’ lives I would have to keep track of in this damn book. The answer is too many.

And it’s not like the portrayal of the people of color is much better. Inevitably, since this is England, they’re an Indian family (as opposed to, I don’t know, a Nigerian one or an Egyptian one, or some other descendants of a country previously colonized by the British). So they’re a Punjabi Sikh family with the surname, Jawanda. The character that is given most prominence is Parminder Jawanda, a wife and mother of three. She is described as skinny, cranky, and with inevitably “almond-shaped” eyes (that particular cliche I could not forgive as easily. Rowling ought to be ashamed, relying on such a lazy trope for a main character). Her husband, Vikram, is described as far more easygoing and, in the words of Samantha Mollison, looks like “sex on legs”. Does anyone smell the casual racism here? The brown man is sweet and friendly and everyone approves. The woman is always grumpy and disliked by everyone. What’s that word that Moya Bailey came up with? Misogynoir? Does that apply to brown women, too?

What’s worse is the portrayal of Sukhvinder Jawanda, third child to Parminder. This poor girl clearly experiences her fair share of racism as well. Her hairiness and the shape of her body cause a particularly mean-spirited character to refer to her as a hermaphrodite. As a result, Sukhvinder cuts herself when she is alone.

Sure, sure, all this is allowed because this is a fictional novel, and besides, the good Tessa Wall and Gaia Bawden see the racism for what it really is. Get a grip, y’all. This is an example of trauma porn, the same kind you find on Orange is the New Black (so if I’m being honest, I didn’t get past the second episode of season two with that show. But the horror stories I have heard about episode twelve in mystery season hasn’t got me too excited to start again). White people can’t be bothered to portray people of color in a position in which they actually have institutional or radical power (or really any kind, for that matter). Thus, they stay in their roles as fuming examples of Things That Need Trigger Warnings (if you believe in that sort of thing).

At this point I must add a spoiler alert, for those of you who give a fuck.

I did find the end to be quite surprising, though. For all that seemed predictable about the first four fifths of the novel, the last was shocking. I don’t think it is any mistake that three characters who embodied the Fields are dead by the end of this novel. Before presenting my analysis, I must confess it may be somewhat patronizing. For all I know, there is some other message Rowling was trying to convey, and I am missing it. My class analysis is not as strong as it could be. However, from my point of view, it seems like the (slightly ham-fisted) message here might be that people of the working class are most affected by the decisions made by wealthier people (and if this was a message, I felt it could definitely have been strengthened if the working class characters had been people of color. That would challenge white readers to complicate their narratives a little more than they do currently, and it also would reflect the truth more accurately).

Another theme I could tease out was that Real Change does not take place unless violence occurs. Pessimistic as that may seem, it’s an outlook I can agree with more. I do appreciate Rowling for not coddling the reader with the ending. In my experience, people do not do anything to change the status quo until they see someone with whom they identify harmed as a result of current proceedings. Perhaps Krystal Weedon truly was a part of the community of Pagford. It is only after her death that people began to take action against the established members of the town.

Those of you who like my book reviews–feel free to suggest another book. Winter break is coming up and I’ll have time to do more writing soon! Leave your suggestions in the comments below. Thanks for reading!