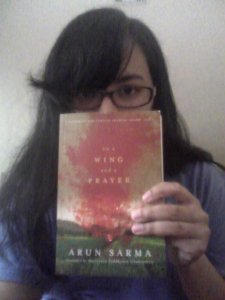 I just finished reading On a Wing and a Prayer, by Arun Sarma. It’s a tragic story, but fascinating because it’s about Assamese people like me. I had never read a piece of fiction about Assamese people before I came across this book. Obviously, there is other literature about Assamese people, and the literature has existed for a long time, but for some reason it took 22 years for me to find. The work is translated from Assamese into English, which makes it even more fascinating. The English text still has the residue of Assamese speech. I can hear the quaint interjections and greetings being said in the language they came from. I can picture the green hills, the village life, and the river that I have seen myself when I read this book. I never thought I would read about that place in an English text. I didn’t know it could exist in English prose.

I have recently learned a lot about the region of the world where my parents are from. It turns out people from northeast India, or the Northeast, are treated in India much like minority populations are treated in the United States. Their level of education is often questioned. They are taunted about their accents, their slanted eyes, and their way of life. They are often denied access to public spaces, or their citizenship is questioned. In essence, they are treated like second-class citizens in their own country. (Sound familiar?)

I didn’t know this until just this past year. Suddenly, many of the encounters I had with other Indian Americans as a child make more sense now. I grew up in the United States, where Indians are often lumped together as a group. Americans are hardly sensitive to the level of discrimination and in-group/out-group dynamics that occur within minority populations. I assumed, before ever having any Indian friends, that I would be fully accepted as Indian if I were to ever to find any because that’s what I assumed I was.

It became very clear to me, upon meeting other Indians (at the age of 5, nonetheless), that I was not like them, at least they didn’t think so. Most Indians I came across didn’t know that Assam is a state in India, let alone being familiar with where it is. They often questioned the authenticity of my “Indianness”, commenting on how I “look more Hispanic”, my eyes are “so Asian”, my features “are not Indian at all”. They thought that because I didn’t speak Hindi (which I can now), or one of the languages they’d heard of, like Gujurati or Marathi, I was not Indian. The people who did know what and where Assam is tended to exotify me even more than the non-believers. They said the sorts of things you’d expect white men at a bar to say to me: “Oh, that’s so diverse!” or my personal favorite, “Wow, you’re so exotic.” To no surprise, I never felt I belonged to the very people who were supposed to claim me as their own.

I ought to explain, it is no mistake that I look more Southeast Asian than South Asian. The region of Assam is a mix of several cultures of East Asia, Southeast Asia, and South Asia. Assam is located in the Brahmaputra valley, on the border between India and China. A number of tribes populate the region, and several different languages are spoken. The culture of the area often more closely resembles those of Vietnam, Thailand, and other Southeast Asian countries than that of the rest of north India (Hazarika, 1994). Some of the languages spoken in the Northeast belong in the Mon-Khmer language family, an Austro-Asiatic language family, though it should be noted that Assamese is an Indo-Aryan language (the easternmost Indo-Aryan language, according to the 2001 Indian Census).

Growing up, I never once felt inferior for being Assamese. My mother taught me the significance of my culture since the day I was born. She made sure I learned to speak Assamese. She taught me about Assamese homes, how they worship, what they eat, and what they wear. She taught me their music, she told me their stories. I spend a lot of my time being angry with her. I always wondered why my parents moved our little branch (more like, twig) of the family over here to the United States, and why I had to watch everything over there from afar. I always wondered why my mother never knew what I wanted, why she never understood when I had a problem, and never yielded when I wanted my way.

I have never thanked her for what she gave me. She taught me where I am from and instilled a sense of pride in who I am. She has given me enough knowledge for me to be a vessel for my culture, to be able to transmit it to another generation if I choose to do so. She has filled me with a love for that place that claims me as its own. She gave me somewhere to belong on this lonely planet.

For those of you who know who I am, I have never admitted how important being Assamese is to me. I would go so far as to say I consider my Assamese identity more salient than my Indian one. People have always acted like it doesn’t matter. They have told me it is such a trifling difference, such a confusing distinction, can’t I just be happy being Indian? I always went along with the suggestion because I did not have the tools to explain why it matters, and even if I did, it would be too exhausting to explain. I will not let that be the case any more. In a perfect world, it would not matter. Being Indian would encompass being Assamese. But knowing what I know now, knowing that this small place that claims me already does not have a voice, and has even less of one if I never do anything about it, is not fair. It is more than unfair, it is unjust. At the University of Florida, where there are 50,000 students, there were 5 Assamese people when I was a freshman. That’s 1 for every 10,000 students. By now, two have graduated. That means there is 1 for every 16,667. After I graduate, there will be 2. That is 1 for every 25,000 students. That is staggering. We are exceptionally rare.

I only ask that you remember me. Remember where I am from. Remember what I have said here. You will search a long, long time before you meet another person like me.